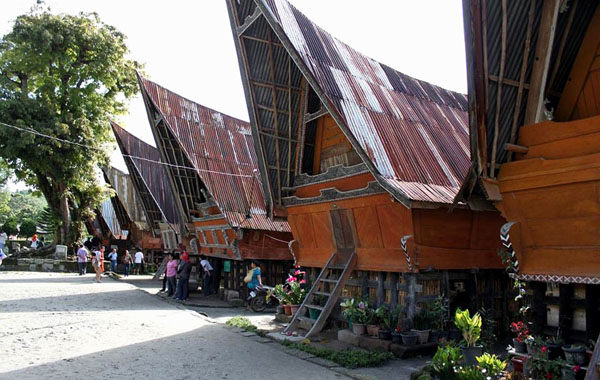 Samosir Island is an important tourist spot in North Sumatra Province apart from Toba Lake. The fact is it is the part of such fabulous lake. The island is famous for its flawless nature and traditional settlements. In Ambarita Village, there is a small settlement called Siallagan. It belongs to Simanindo Sub-district, actually. The location is near to other villages like Tuktuk and Tomok, which takes about 20 minutes from those areas. When it comes to the most popular attraction, people are into the Stone Chair of King Siallagan! Simply put, that historical site offers both unique history and nuance to tourists and visitors.

The Nuance
The size of Huta Siallagan is about 2,400 m2 and it is surrounded by lush nature and stone fences. Despite the small size, it is considered a beautiful settlement. In fact, visitors can feel a traditional nuance due to the presence of a bamboo fort that was used to prevent attacks from either animals or enemies back then. When it is about the name, it was inspired by the first king of Huta – Laga Siallagan. This explains why tourists can find some ancient tombstones of such king and his descendants in the village.

Exploring Siallagan Village
Once visitors get to Siallagan Village, they might see several traditional Batak Houses that have been there since hundreds of years ago. These houses have different functions, actually. Some of them were used as the king’s residents, while the others were used to exile people. There is also a big old tree, residing near to those houses. According to the locals, the tree is sacred and haunted. This is why the aura is a bit creepy there. Instead of being afraid, tourists are likely to take pictures in front of it!

The most famous attraction in Siallagan Village is the Stone Court or “Batu Persidangan”. As the name implies, it was used to conduct a court among the locals. In order to learn the history of such historical site, visitors can talk to their tour guide. As an alternative, they can ask information from villagers. Apart from hearing such interesting story, they are allowed to take pictures on the site. The thing is they should not litter or cause damages to the site. These are common rules when visiting a tourist spot, after all.

What’s next? Siallagan Village is also famous for its traditional dance, which is called Tor-Tor. Not only tourists can enjoy the dance, but they are also allowed to join it. Have no worries. The local dancers might teach them how to perform it. It would be a memorable experience, so all visitors should try it someday when visiting Siallagan.

How to Get There
For those coming from Medan, the first checkpoint is Parapat Town. From there, they need to take a boat and head to Tomok Port. The next trip heads to Ambarita Village, which takes about 20 minutes. Next, tourists can simply walk to reach Siallagan, as the location is quite near to Ambarita. That’s it.