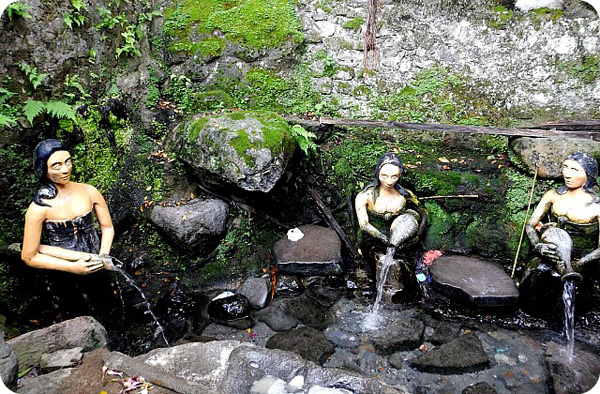 Each tourist attraction is unique. If you visit Samosir Island, you can enjoy many interesting charms. For example, there is Aek Sipitu Dai Fountain. The name means the fountain of 7 sensations. It is located in Sianjur Mula-mula District, Pangururan. As the name suggests, it features 7 different fountains. Each of them has a unique taste. They are situated in the same location beside the Jabi-Jabi tree. These fountains attract many visitors every day. In fact, some foreigners come here during holidays.

Aek Sipitu Dai Fountain is a Holy Place
A unique part of Aek Sipitu Dai Fountain is its flavor. All of the fountains don’t have a regular water taste. Even though they come from a single source, they taste differently. The rumor has it. If you take the water to other location, it loses its taste. That means the water becomes tasteless. The same result happens if you bring the water to unblessed places. No one knows the reason. Many people consider it as a blessed fountain. They believe it has some mystical powers.

The locals often come here for a blessing. It is said that the tap water is able to heal numerous diseases. According to local people, the Debata Mula Jadi Nobolon may grant any wishes for those who pray in the fountain. Due to this belief, many visitors pray for wealth and health. In fact, many of them have proven its efficacy. Aek Sipitu Dai Fountain is well-known both among local and foreigners. Tourists want to witness its uniqueness with their own eyes.

Aek Sipitu Dai Fountain also becomes a heritage of Batak Toba culture. In fact, it is the part of local legend. The fountain is situated under a sacred and dense tree. As mentioned earlier, there are 7 taps with different taste. In fact, local people use them for different purposes. The first tap is called Aek Poso. Women often use it to bathe their toothless kids. The second tap is often used by infertile women. It is said the water can increase the chance of getting an offspring.

How to Get There
Aek Sipitu Dai is located in Sianjur Mula-Mula District. It is near to Efrata Waterfall. No worries. You can reach it without hassles. Thanks to the street signs. From Medan, your first checkpoint is Kebanjahe. From here, you need to head to Sidikalang. Once you reach Simpang Tele, you must turn left. Follow Dolok Sanggul-Sidikalang Street until you find another Simpang Tele. This is the last trip as you can directly head to Aek Sipitu Dai. Many hotels are available nearby. This includes Tiga Besar Hotel.