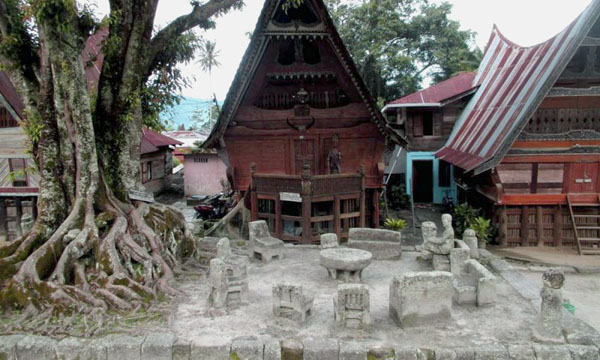 Toba Lake is, without doubts, the best tourist lure in North Sumatra Province. However, travelers should never miss the chance to visit Samosir Island, which is located in the middle of such grand lake. The island becomes the home of numerous traditional villages like Ambarita and it is a worthy location to enjoy a vacation. So, what makes it popular? Most of the visitors come to the village to see historical items, which are the relics of Megalithic Era. Apart from its historical value, Ambarita also offers unique local traditions. That means both local and foreign tourists can learn many things there.

The Nuance
The nuance of the village is a bit creepy, as it features old and traditional houses. According to the locals, the settlement has been there since more than hundreds of years. The best thing is the villagers retain their culture and traditions well. That means they aren’t likely to adapt to modern ways of living, so travelers won’t find luxury facilities there. Some big trees also become unique features of the village, and they create a comfortable nuance. As for the villagers, they are friendly. Even foreign tourists can approach them without hassles. Still, it is better to come with a tour guide for the sake of better communication.

Exploring Ambarita Village
Here is the question. What can people do in Amabarita Village? Mostly, it is related to historical tourism. That means tourists are able to study classic and ancient architectures there. The most popular attraction is indeed Ruma Batak. It is the formation of Batak’s traditional houses, representing both beauty and valuable Batak Tribe’s culture. It is said those houses have an important local philosophy. Not to mention such traditional house becomes the pride of the locals, becoming a signature culture of Batak People. For tourists, it is a perfect object for photography. They can even enter the house with a permission of the villagers.

The next attraction is a historical site called Parsidangan Stone. It is located in front of Ruma Batak (traditional houses). According to the locals, the site was used as a local trial area. Apart from that, it was the location where criminals were executed. In terms of age, the site has been there for more than hundreds of years. Despite its creepy history, the site becomes tourists’ favorite location for photography. In fact, historians often come to the location to study about its story and other related information.

There is another unique attraction in Ambarita Village, which is called Hariara Tree. The locals consider it as a sacred tree and they believe it has been there before the existence of local settlements. Due to its mystical aura, villagers often come to the location and conduct a kind of ritual. They ask for both wellness and prosperity from it. This unique tradition indeed attracts tourists’ attention when exploring Ambarita.

How to Get There
The fact is Ambarita Village belongs to Samosir District. To be exact, it is located in Simanindo Sub-district. In order to reach the location, tourists need to head to Tomok Village first. From there, they can take a boat in Tomok Port. The voyage takes only 20 minutes. As for an alternative, travelers can come to Ambarita from Tuktuk Village. This takes about 1 hour, though.

Sirombu Beach: The Most Beautiful Beach in West Nias

For those of you who come to Nias Island for your next vacation, it is better to find information about attractions that were previously available. As for reference, the beautiful beach is in West Nias Regency named Sirombu. Usually tour agents will recommend this place to locals and foreigners. The reason is none other than the sunset view. In addition, Sirombu Beach is also equipped with amazing facilities and surroundings. Not surprisingly, many people consider it the best vacation spot in West Nias Regency. It is true that Sirombu Beach…

What makes Indonesia is a worthy vacation destination? Many travelers are impressed by nature beauty of the country. Moreover, there is a famous tourist spot in North Sumatra Province, which is called Toba Lake. Being the biggest lake in Indonesia, Toba becomes the signature tourism in Sumatra Island. It is because the flawless nature and pristine water would satisfy all visitors. People come to the lake to enjoy a family recreation, sightseeing, photography, and exploration. The fact is many different tourist spots are scattered around the lake. Tourists can explore…

Bohorok Rehabilitation Center Bohorok Rehabilitation Center is a shelter for Orangutan in Sumatra that settled in Bukit Lawang. Bukit Lawang is one of the top destinations in Sumatra; Bukit Lawang is a small village on the edge of Gunung Leuser National Park in North Sumatra. Situated around 90 km north-west of Medan along the clear Bohorok River and on the outskirts of the tropical rainforest. As we know, The Gunung Leuser National Park is also one of the homes to Orangutan that spread in entire Sumatra Island. Thomas Leaf monkeys, Black Gibbons, White…

Gunung Leuser National Park Gunung Leuser National Park (TNGL) is one of Nature Conservation Areas in Indonesia that covering an area of 1,094,692 hectares. The administration is located in two provinces of Aceh and North Sumatra. This forest is dominant in East Aceh, South Aceh and Langkat North Sumatra; it known by the results of world-class coffee and tobacco. Those who love to travel can start the adventure in this national park through Bukit Lawang, North Sumatra, where there are the impresive of orangutan that live inside the forest.…

Hotel Deals of the Day